In an Election Night Poll of 800 actual voters conducted by Public Opinion Strategies last night we asked voters whether they agree or disagree with the following statement:

“The economic and political systems in the country are stacked against people like me.”

But, it’s what the data looked like by party that provides a clear and compelling answer to a question many are asking “what just happened?”

This is the answer because this populist sentiment is traditionally a Democratic and liberal one. It’s something that you would be just as likely to hear at a Bernie Sanders rally or find woven into a speech delivered by Former President Bill Clinton in the 90’s – “I feel your pain.”

It is a sentiment that has consistently and strongly resonated, understandably, with African-Americans, the less well-educated, and lower income households. Whites and better-off Americans have traditionally disagreed. And, largely these race and class divisions in America still exist!

As the graphic below shows, this sort of populist swelling in the Republican Party has happened before, and has always been followed by notably positive electoral results: 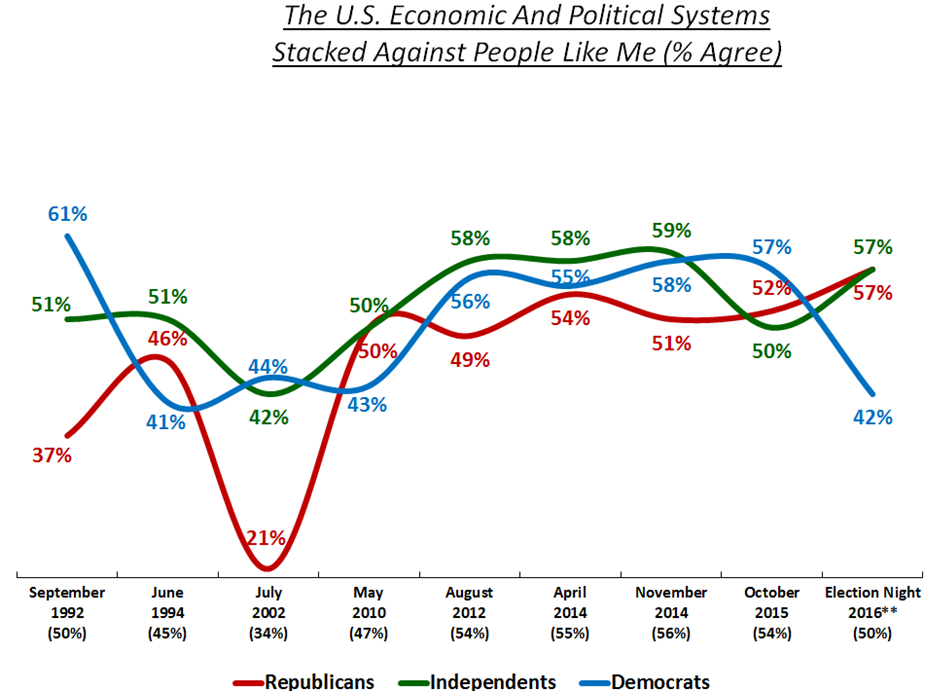 Bottom Line
There has long been a “disaffected middle” that can swing to either political party, the Independent voter is a simple and instructive way to capture them in a set of cross –tabs. Republicans have proven able to mobilize these voters to deliver electoral wins that have meaningful and lasting consequence.

Trump’s oft-maligned brand of populism took hold among Republicans and Independents, it forced Democrats to shrink from this traditionally liberal point of view, and defend the system, their candidate’s own political elitism, and the staleness of the status quo.

Public Opinion Strategies helped us to clarify what we wanted to learn and then conducted research and analysis that shed light even beyond the questions we set out to ask. They were very receptive to our suggestions, responsive to our queries, and flexible when we needed them to be.

Public Opinion Strategies has consistently offered unparalleled advice and spot-on polling that has shaped how and where we spent money and deploy key resources. Additionally, they have always been an excellent steward of limited campaign resources, ensuring we spend wisely and not a dollar more than necessary in order to get the information we need.

Robert Blizzard and Public Opinion Strategies did a great job for us throughout our successful campaign for Congress. Robert gave us accurate data, spot on analysis, and professional advice, all of which were essential to our victory.

Public Opinion Strategies is one of our go-to pollsters when it comes to testing public support for bond ballot measures and other initiative proposals. They are available to provide ongoing consultation with regard to crafting of ballot questions, public outreach messaging, and related efforts.

ACLI has worked with Public Opinion Strategies for decades, through several tough industry battles—often ones in which public opinion does not naturally fall on the side of insurers. Yet Bill and his team consistently provide invaluable strategic advice by refining our messages and helping us frame our issues in a way that makes them understandable and persuasive.

The data from Public Opinion Strategies provided important insight and informed our public awareness campaign. We sincerely appreciate their professionalism and expertise in this arena.

Nicole McCleskey and the team at Public Opinion Strategies have been invaluable to me, both during my campaigns and as Governor of the State of New Mexico. It’s not just the accuracy of their numbers, but guiding the overall strategy that makes them so valuable.

Public Opinion Strategies has been a part of our team in Missouri for more than a decade. With their data and guidance, Republicans here were able to attain a majority in the House in 2002 for the first time in fifty years, and we have been able to grow that majority to the point that we now have a record, veto-proof majority.

In my tenure at two leading business associations, facing huge and complex consumer issues, I have benefitted enormously from the objective advisory skills of Bill and his team. They do their homework, they are rigorous, dispassionate and thoughtful. Turning questions into answers is a clever tag, but it’s also an apt description of the professional talents of the firm.

Public Opinion Strategies’ track record of success and wealth of experience in political campaigns and issue advocacy are why they are one of the most trusted and well respected public opinion firms in Washington, D.C. Their insights and perspectives have helped to inform a wide array of public affairs activities across multiple industries.