This past week, my wise and insightful partner Glen Bolger posted a blog entry labeled, “The Tipping Point.” It is definitely worth reading.

IMPORTANT: These numbers are from ALL adults.  When we look at white adults (it is safe to say that the GOP nominee will be significantly less competitive among non-Anglo portions of the electorate), the numbers show a President who’s ALREADY TIPPED. 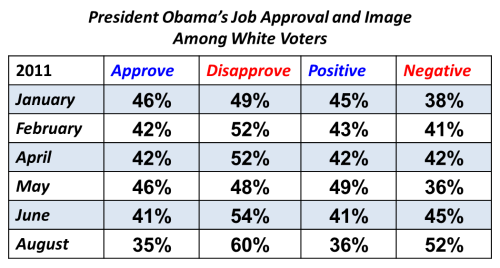 For years, campaigns have sought to “tip” the opposing candidate over and disqualify them by turning their image (favorable-unfavorable) upside-down.  When we look at the competitive portion of the electorate, President Obama is there already.

So what does the future look like given a stagnant economy? If the President’s re-election is successful it is because he did one or both of the following:

…And if the election were held today, that wouldn’t be enough.