Continuing my focus on the national debt, I think it’s interesting to note that the group most in favor of change during the 2008 presidential campaign is also the group seeking the most change to help address the country’s fiscal problems – that is, younger voters (age 18-34). They are a group that the Republican Party should be paying close attention to given the motivated turnout of 18-29 year olds in November, and their choice for Obama over McCain by 34 points (66% to 32%).

In a survey conducted on behalf of the Peter G. Peterson Foundation general attitudes about the deficit and debt are not that different among this younger cohort. True, on some measures younger voters are less intense about their feelings – for example, 60% say the growing budget deficit and national debt is a very big threat to the country, compared to 65% of 35-49 year olds, 68% of 50-64 yr olds, and 73% of seniors. But, the overall outcome is the same – younger voters rank this as the biggest threat of the five items we tested, as do all age groups: 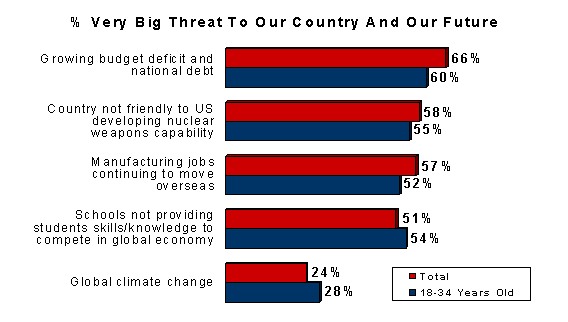 The differences come when we ask about what should be done to address the country’s fiscal problems. This younger cohort’s penchant for change kicks in and they break from the rest of the electorate. Given three choices of whether we should be “spending less on programs such as education, defense, and law enforcement,” “increasing taxes,” or “making major reforms to entitlement programs such as Medicare and Social Security, which likely will mean cutbacks in promised benefits to future retirees,” 18-34 year olds are the only group to give entitlement reforms majority support (51%).

Younger voters are also the only age bracket expressing majority support when asked about different approaches to dealing with the debt. Half of voters age 18-34 agree that just cutting waste, fraud, and abuse in government spending and cutting spending on the war in Iraq is not enough, and that in order to adequately address our budget problems and growing national debt we have to “make major structural changes to large entitlement programs…major changes to our federal tax system and other government spending.”

No doubt if you’re in this 18-34 age bracket you might care less about cutbacks for future retirees and reforms to Social Security and Medicare than those who are closer to that stage in life where they’ll become entitlement program beneficiaries. But, if this group stays as motivated on this issue as it was in the 2008 election, we may see increasing pressure on Congress to make these major changes…and Republicans might want to sit up and listen…

(This analysis is based on a bipartisan survey conducted by Public Opinion Strategies together with Peter D. Hart Research Associates for the Peter G. Peterson Foundation. Neither Peter D. Hart Research Associates nor the Peter G. Peterson Foundation are responsible for these conclusions.)
‹ Previous Post › Next Post
MOST RECENT
What’s Changing? The Latest on American Opinion about COVID and our Health Care System
Jan 14, 2022 In the News: As More Teachers’ Unions Push for Remote Schooling, Parents Worry. So Do Democrats.
Jan 10, 2022 In the News: The ideas and arguments that will define the next 12 months
Jan 10, 2022 In the News: G.O.P. Fights Covid Mandates, Then Blame Biden as Cases Rise
Nov 29, 2021 In the News: Dems misjudging which issues voters care about
Nov 8, 2021