The incumbent party loses when voters say No Confidence
September 21, 2009

The Michigan Consumer Confidence Index numbers for August are out: 65.7, or one of the 33 worst months on record. The University of Michigan started the Index in winter of 1978 and has released data monthly ever since.

While not as predictive as one of our other favorite indexes, the Misery Index, the consumer confidence index is helpful in telling us what happens when the voters express a lack of confidence.

What happens when the Index is over 90 going into the November elections? The incumbent party generally wins re-election at the top of the ticket.

Well, almost. In October of 2000, the Index was 105.8 and George W. Bush (43) and Al Gore fought to what was politely described as a draw. Of course, it is now part of liberal folklore that the incumbent party, the Democrats, won. 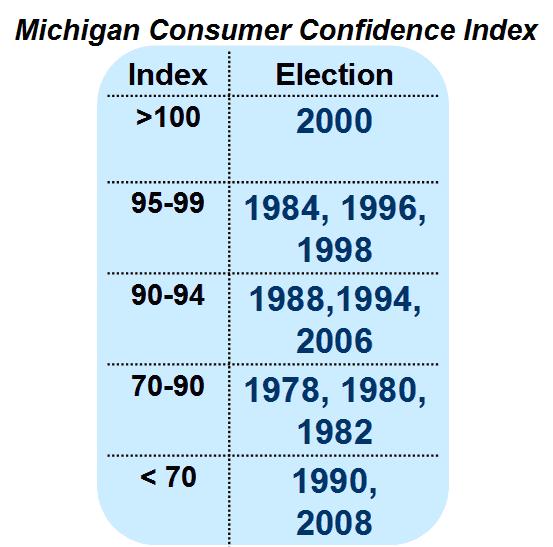 While index scores between 90 and a hundred can win reelection for the president’s party, the “90s” usually aren’t good enough for the incumbent party in midterms elections. The low 90s can even spell disaster.

Democrats lost their congressional majorities in ‘94 (92.7). In the 1998 “Impeachment Election” Democrats won seats in the House with a 97.4 Index followed by Republicans losing their majority outright in the Iraq/Katrina Election of ‘06 (93.6).

As a reminder, the August numbers show 65.7.