As an aside, it is worth noting that most of the data on which I based my blog post last year came from Gallup, but unfortunately, they do not have any Kavanaugh data just yet.  Nonetheless, the Fox poll does tell virtually the same story – namely, that initial public support for recent SCOTUS nominees is tightening (or at least below average in some cases) because a majority of members of the party opposite the nominating president oppose confirmation, a trend that began in 2009 with Sonia Sotomayor’s nomination.  The table below illustrates this trend (again, the trend data from Thomas through Gorsuch comes from Gallup, while the Kavanaugh data comes from Fox): 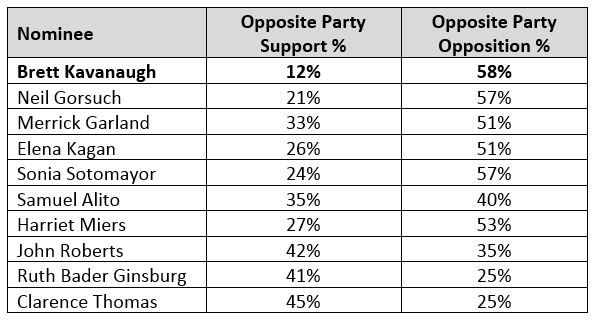 As I noted last year, the Harriet Miers case was unusual in and of itself, perhaps accounting for the majority of Democrats opposing her confirmation initially.  But, assuming Gallup and/or other respected public polling outfits will soon register a similar number on Kavanaugh’s nomination among Democrats, we will be able to say with confidence that Kavanaugh’s nomination to the Court will have registered the lowest initial support and perhaps the highest opposition numbers of any nominee among a partisan group for over 25 years.

Of course, none of this is to suggest that Kavanaugh himself is responsible for these numbers.  Nonetheless, based on recent history, we can expect public opinion on his nomination to further tighten as his hearings begin and Senate Democrats launch their promised assault to try to defeat his nomination.