The below chart from the firm of Mehlman Vogel Castagnetti has been featured on this blog numerous times over the past several years. The latest version shows the polarization that exists in the U.S. Congress has continued to grow. 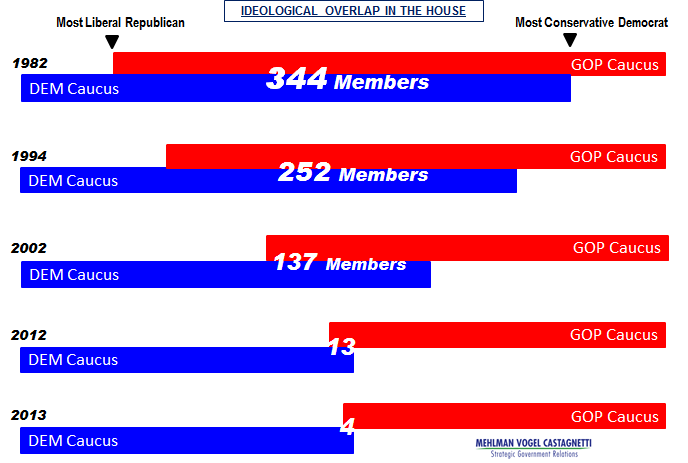 A recent Pew study, based on interviews with over 10,000 adults nationwide, (http://www.people-press.org/2014/06/12/political-polarization-in-the-american-public/) shows this growth of polarization is being seen among the general public as well:

And, when looking at the Americans who are the most politically engaged (those who are registered to vote, follow government and public affairs most of the time, and say they vote always or nearly always), this split widens even further: 99{09f965da52dc6ab4c1643a77bd40d1f729d807040cd8db540234bb981a782222} of Republicans are more conservative than the median Democrat, while 98{09f965da52dc6ab4c1643a77bd40d1f729d807040cd8db540234bb981a782222} of Democrats are more liberal than the median Republican. This is an eleven point increase among Republicans and a fourteen point increase among Democrats compared to ten years ago.

Some of the other interesting key findings from the study include:

All of this data points to one thing – there are no signs the current polarization in American politics is narrowing. With less and less mixing of political beliefs among family and even friends, the political middle is not likely to be a dominant force in the coming years.

Public Opinion Strategies helped us to clarify what we wanted to learn and then conducted research and analysis that shed light even beyond the questions we set out to ask. They were very receptive to our suggestions, responsive to our queries, and flexible when we needed them to be.

Public Opinion Strategies has consistently offered unparalleled advice and spot-on polling that has shaped how and where we spent money and deploy key resources. Additionally, they have always been an excellent steward of limited campaign resources, ensuring we spend wisely and not a dollar more than necessary in order to get the information we need.

Robert Blizzard and Public Opinion Strategies did a great job for us throughout our successful campaign for Congress. Robert gave us accurate data, spot on analysis, and professional advice, all of which were essential to our victory.

Public Opinion Strategies is one of our go-to pollsters when it comes to testing public support for bond ballot measures and other initiative proposals. They are available to provide ongoing consultation with regard to crafting of ballot questions, public outreach messaging, and related efforts.

ACLI has worked with Public Opinion Strategies for decades, through several tough industry battles—often ones in which public opinion does not naturally fall on the side of insurers. Yet Bill and his team consistently provide invaluable strategic advice by refining our messages and helping us frame our issues in a way that makes them understandable and persuasive.

The data from Public Opinion Strategies provided important insight and informed our public awareness campaign. We sincerely appreciate their professionalism and expertise in this arena.

Nicole McCleskey and the team at Public Opinion Strategies have been invaluable to me, both during my campaigns and as Governor of the State of New Mexico. It’s not just the accuracy of their numbers, but guiding the overall strategy that makes them so valuable.

Public Opinion Strategies has been a part of our team in Missouri for more than a decade. With their data and guidance, Republicans here were able to attain a majority in the House in 2002 for the first time in fifty years, and we have been able to grow that majority to the point that we now have a record, veto-proof majority.

In my tenure at two leading business associations, facing huge and complex consumer issues, I have benefitted enormously from the objective advisory skills of Bill and his team. They do their homework, they are rigorous, dispassionate and thoughtful. Turning questions into answers is a clever tag, but it’s also an apt description of the professional talents of the firm.

Public Opinion Strategies’ track record of success and wealth of experience in political campaigns and issue advocacy are why they are one of the most trusted and well respected public opinion firms in Washington, D.C. Their insights and perspectives have helped to inform a wide array of public affairs activities across multiple industries.