Governing Is About Ideology and Competence
August 25, 2009

This article was co-written by Glen Bolger and Jim Hobart.

Gallup recently used the ideology data from their tracking surveys from the first half of 2009 to compiled a list of the most conservative and most liberal states. While there are few surprises in the data (Alabama and Mississippi are the most conservative states, Massachusetts and Vermont remain very liberal), we thought it would be interesting during this recession to see if ideology impacted the level of budget shortfalls that states are faced with this fiscal year.

The Center on Budget and Policy Priorities has an excellent breakdown of the shortfalls in almost every state, and a look at the shortfalls in the most liberal states and in the most conservative states is very revealing. Nine of the ten most liberal leaning states had an average budget shortfall of 15.2%, which was identical to the national average. However, in nine of the ten most conservative states, the average budget shortfall was just 8.7%, significantly lower than the national average.* 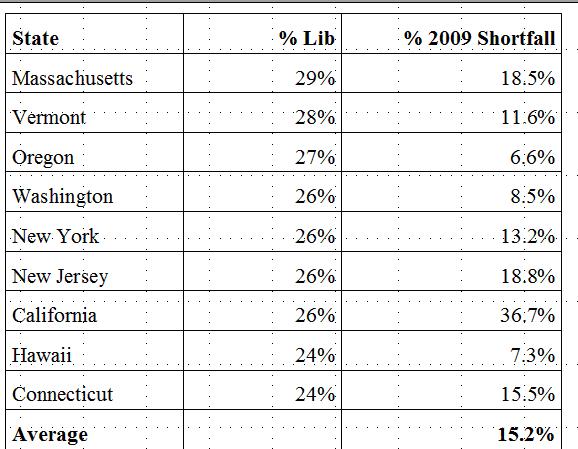 Clearly, factors other than the ideological bent of a state’s electorate play a role in the size of their budget deficit. States with smaller populations tend to run lower shortfalls, for example. However, the data indicates that the fiscal policies of the states with the more conservative electorates have helped them to avoid the large budget deficits faced by many states, both liberal and moderate. The fiscal policies of each state vary, but these most liberal states were not able to stem the tide of budget shortfalls by pursuing policies that increased spending, raised taxes, and grew the size of government.

‹ Previous Post › Next Post
MOST RECENT
The Forces Shaping America and the 2022 Election
Jun 17, 2022 Attitudes on Health Equity and the Social Determinants of Health
Jun 14, 2022 POS National Poll Release
Jun 9, 2022 Public Opinion Strategies Congratulates Plethora of Early Primary Winners
May 18, 2022 Coach K may be more popular than you think
Apr 1, 2022