Control of the House of Representatives after the 2012 elections will still belong to the Republicans.  IF Barack Obama stages a political comeback (which is certianly within the realm of possibility), Democrats will start the presidential coattails drumbeat.  However, there are two compelling tables in this post underscoring that the House outcome will dance to the beat of a different drummer.

These two factors will end up having a snowball effect, costing Democrats in retirements, candidate recruitment, and fundraising — all of which will further debilitate their comeback efforts.

The first factor is that even strong Presidents who win re-election do not have long coattails.  Look at the last three re-elected Presidents — Reagan ’84, Clinton ’96, and Bush ’04.  Two were blowouts and one was close.  In 1984, the GOP won 16 House seats.  In 1996, the Dems picked up nine House seats.  In the two blowout re-elections, the President’s party picked up an average of just 12.5 seats.  In the close election of 2004, Republicans won three seats.  Across the three elections, the average pick-up for the President is 9.3 seats.  Obama is not likely to win a blowout re-election.  Given Obama’s problems with white working class voters and the unifying effect he has on the GOP base, he is much more likely headed for either a close win or a loss rather than a big win.

The table below looks at the five most recent Presidential re-elects — three wins and two losses.  The two losses show inconclusive results — although it is clear that Ross Perot’s inclusion on the ballot did not hurt House Republican candidates.  The table emphasizes that when re-elected Presidents have coattails, those coattails are VERY short, if they exist at all.  Only newly elected Presidents might have sizable coattails. 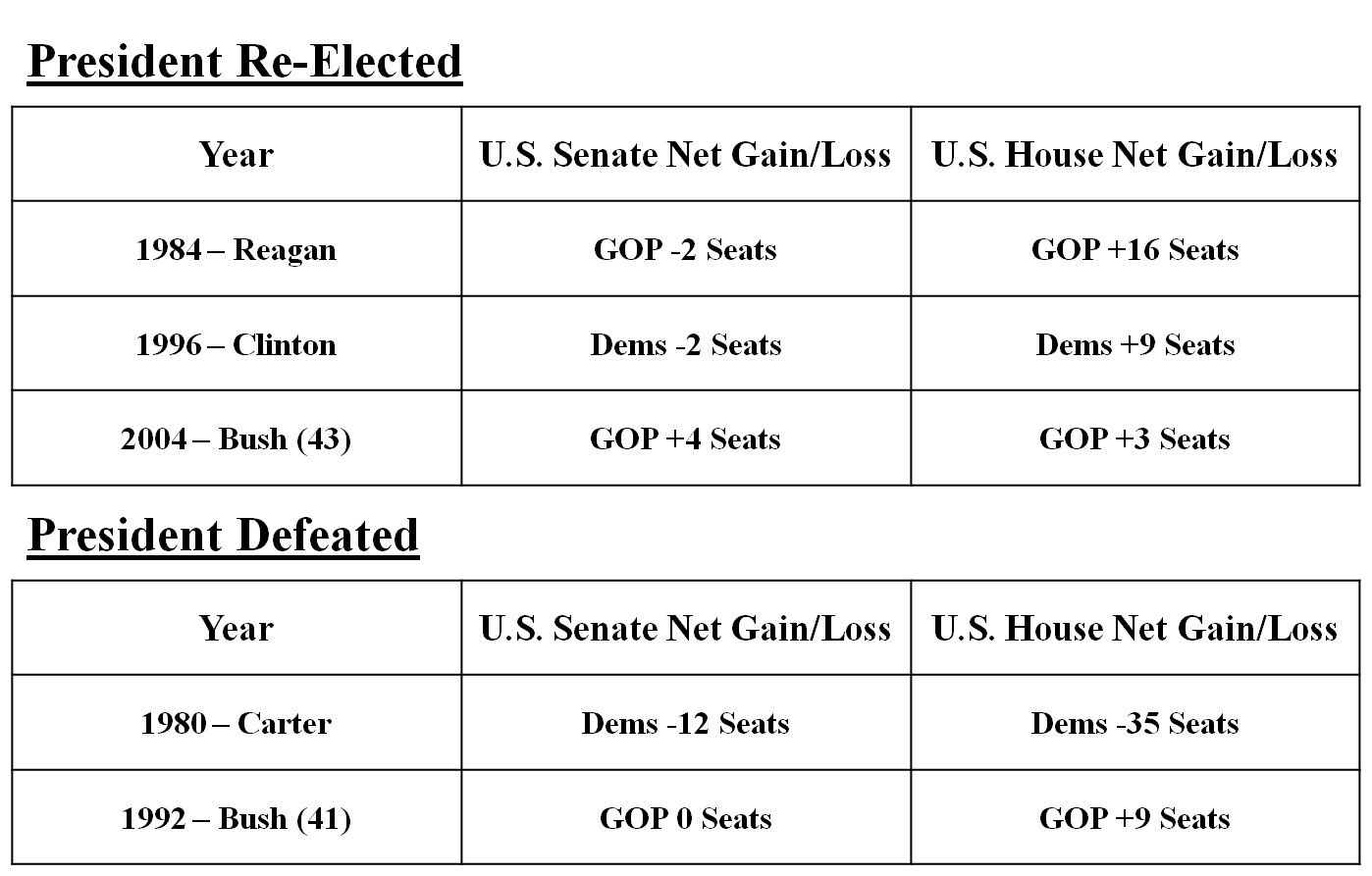 The other factor putting a stake through the vampire hearts of the Democrats’ hopes of control post-2012 is the overwhelming shift in redistricting fortunes.  Because of GOP gains in Gov races and the legislatures, there will be a dramatic change in the structure of the 2012 House races.   In the 2001 redistricting process, Democrats drew the lines of 135 seats, while GOPers drew the lines for 98 — a 37 seat advantage for the Dems.  Now, Republicans control drawing 193 seats outright, while the Dems have just 44.  That’s a 149 seat advantage for the GOP (the rest of the seats are either in split control states, commission drawn states, At-Large seats, or currently undecided).  That represents a 186 seat shift in favor of the GOP from 2001 — and was a year that Republicans won three out of five congressional majorities since.

That does NOT mean Republicans can draw 193 seats they win — but it does mean they can squeeze out additional seats in states they completely control, while making life much more difficult for Democrats.

The table below underscores the dramatic change in the redistricting situation over the last thirty years — going from a GOP disadvantage of -172 net seats in 1981, to -167 in 1991 (making the 1994 GOP takeover even that more earthshattering) to just -37 in 2001, to +149 noted above.  This is NOT Tip O’Neill or Jim Wright’s Congress anymore.  Heck, it’s not even Nancy Pelosi’s Congress, and it’s not going to be her Congress in 2013-14 either.

If Obama wins re-election, Democrats won’t be shouting that the emperor has no clothes.  Instead, they will be crying that the President has no coattails.  And, if he loses, the election night headlines won’t say “Republican President, Democratic House elected.”  Sorry, Dems, but you are in the House wilderness for at least the next four years.

‹ Previous Post › Next Post
MOST RECENT
Public Opinion Strategies Congratulates Plethora of Early Primary Winners
May 18, 2022 Coach K may be more popular than you think
Apr 1, 2022 Public Opinion Strategies Ukraine Memo
Mar 31, 2022 POS National Poll Release
Mar 30, 2022 In the News: Why independents have cooled on Biden — and what that means for Democrats
Mar 8, 2022