Congratulations to Senator Darling and all of those involved in the campaign. 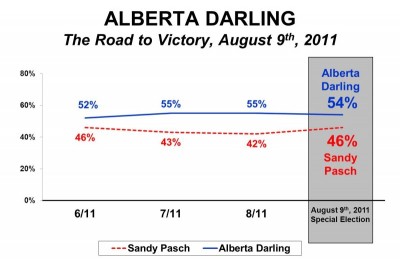 Our polling showed that voters were extremely polarized.  However, it also showed there was little interest in turning back the clock to Pasch’s record of unchecked spending and blank checks for taxpayer funded public employee union benefits.  (Taxpayer funded Viagra for public school teachers?  Really?)

Once voters had a choice, Senator Darling’s support went up.

This is a remarkable finding given the blood and treasure public employee unions spent on an unsuccessful effort to defeat Darling.

‹ Previous Post › Next Post
MOST RECENT
Public Opinion Strategies Congratulates Plethora of Early Primary Winners
May 18, 2022 Coach K may be more popular than you think
Apr 1, 2022 Public Opinion Strategies Ukraine Memo
Mar 31, 2022 POS National Poll Release
Mar 30, 2022 In the News: Why independents have cooled on Biden — and what that means for Democrats
Mar 8, 2022