Big Government is STILL Not the Answer
September 10, 2009

If President Obama can give just one more speech, then maybe Americans will understand that government really does know best and can be the solution to our problems.

The American public has down an abrupt about-face in the last six months when confronted with the realities of an Obama Administration and Democratic Congress. 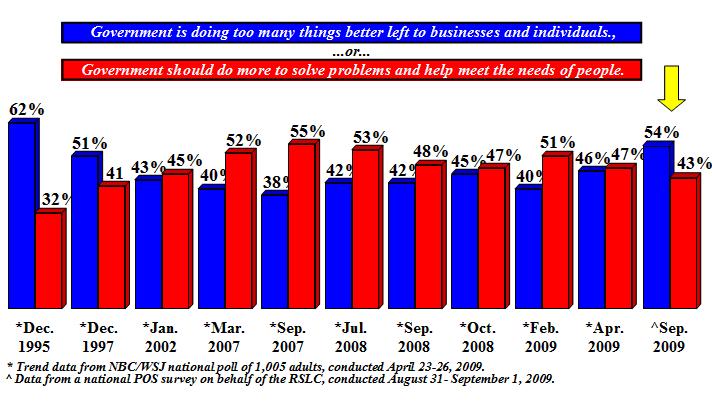 Government over-reach is having a big impact on swing voter groups. By substantial margins, Independent voters, suburban women, Blue Dog Democrats and voters in states Obama won with less than 55% of the vote believe that government is going too far.

In another survey conducted by the Associated Press, in yet another dramatic shift, a near-majority of voters believe that Obama is moving too quickly in his pursuit of change. This marks a significant departure since April – just 4 months ago – when 52% thought the pace at which he was moving was about right. 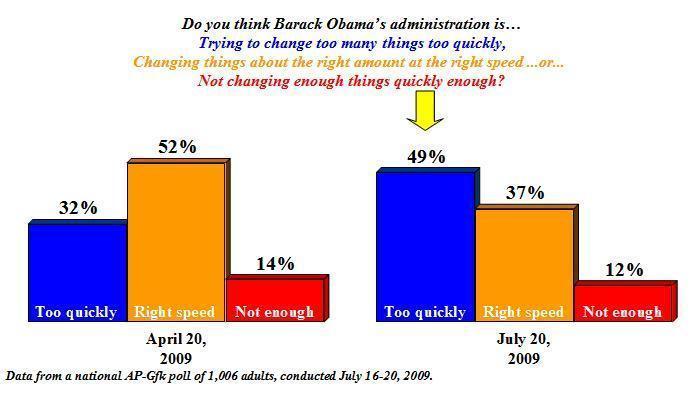 Finally, in a July NBC/Wall Street Journal survey, voters express a loss of confidence in the course Obama has set for the nation. While a majority (54%) expressed confidence that Obama had the right set of goals and policies to be President back in February, a new majority (53%) now do not have confidence in his priorities.

The “change” Obama represents is more radical than American voters were prepared for. This backlash is a clear indicator that his efforts to “fix” the economy and reform health care are just more government than most voters can stomach.