Over the last few months in focus groups we have started hearing respondents make important distinctions between candidates they deem “liberal” and those they see as “progressive.”  The latter are described as being “forward-thinking” and “ahead of the curve,” while more traditional liberals often viewed as a thing of the past.

As a response to this trend, the Public Opinion Strategies team began experimenting with a revised ideology question, providing respondents with options beyond the traditional conservative, moderate, liberal framework.  We have now tested this question on multiple national surveys and are beginning to track attitudinal and demographic data for these “new” ideological categories which will help to inform how we approach the 2020 election cycle.

On our most recent adult omnibus in late April*, we tested the following question language:

Thinking some more about politics and current issues… do you consider yourself to be: (RANDOMIZE) a conservative, a moderate, a liberal, a libertarian, a progressive…or…a socialist?

Importantly, when we re-allocate the categories to approximate the traditional three-part categorization, the responses reflect recent national data.

(Due to smaller sample sizes for libertarians, progressives and socialists, the data below shows average demographic data from our early April* and late April national adult surveys.) 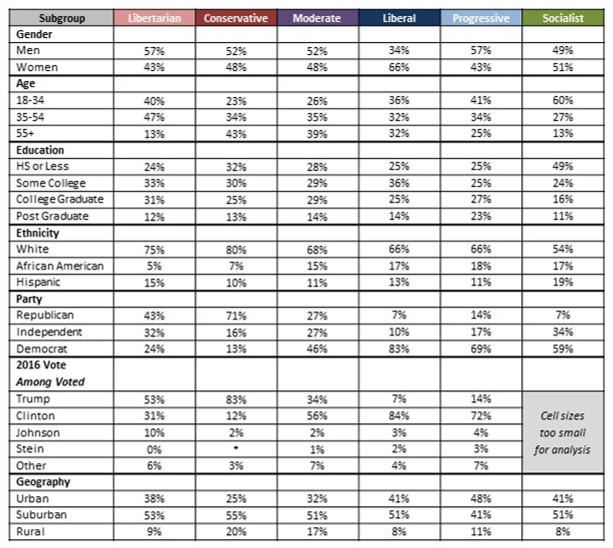 A few takeaways from the demographic profiles:

On our late April survey, respondents also had the option to select a second ideology category.  Close to half of conservatives (49%) had no second choice category; however, there is significant overlap in groups on the left of the spectrum.

Over the coming months our team will continue to monitor these “new” ideological subgroups to help our clients prepare for the 2020 elections.